No products in the cart.

The combination of CO ventilation and smoke control in underground car parks.

Given the continuously rising volume of innercity traffic it is virtually mandatory to provide for adequately sized car parks as a part of every major real-estate development project, whether it be private or public, such as office buildings or shopping malls, museums or theatres. As these locations are frequented by a large number of individuals, high standards apply with respect to building services engineering and public safety. More often than not, conventional car park ventilation systems fail to meet these requirements

In recent years, jet fan technology has established itself as the new standard in car park ventilation in many countries all over the world. In Europe today, more than 2.500 jet fan systems are in operation in car parks of various sizes. As opposed to conventional ventilation concepts based on transverse ventilation and ducted systems, the concept of jet ventilation (frequently also referred to as impulse ventilation) is derived from the longitudinal ventilation systems found in most road tunnels, whereby a high-velocity stream of air is injected by a series of free-blowing silenced axial fans. Thus, jet fans effectively distribute and transport the air on each car park level from the supply to the exhaust points.The decisive design parameters being the air speed profile and the thrust generated by the fan 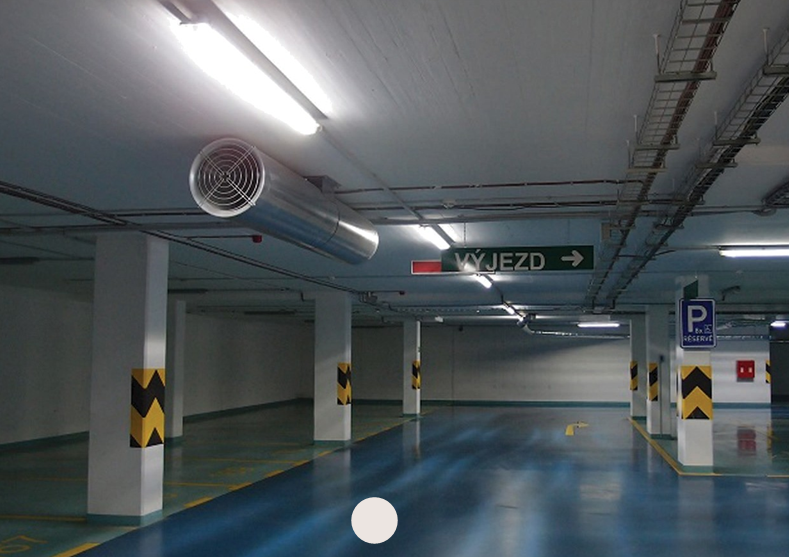 Advantages of the jet ventilation system Smoke control in the event of a fire.

Careful project planning allows to use the jet fan system not only as a means of CO ventilation and mechanical smoke exhaust, but also to effectively control the spreading of smoke. By utilising fully reversible impellers, the thrust direction of each individual fan can be changed in order to contain the smoke within the affected area and to transport it to the nearest exhaust point.This keeps emergency exits free of smoke and prevents smoke from contaminating nonaffected areas of the car park. Depending on the detected location of the fire within the car park, the standard direction of airflow can automatically be reversed so that the air supply inlets can serve as fume exhaust points should they be nearer to the location of the fire. If required, the control logics for this emergency ventilation mode can be designed and programmed by Rosenberg. This direction-controlled containment of fire gases allows for effective fire-fighting, as the location of the fire remains visible and can be safely approached by fire-fighters from the upstream side of the airflow.

As early as 1998 the TNO institute (Delft) examined the effectiveness of the impulse ventilation system in a series of 18 real fire tests in an underground car park in Amsterdam.The results of this test series have been published in a research paper, which, among other aspects, addresses smoke production, smoke propagation and occuring temperatures as well as the possibility of effective smoke control in case of a car fire in an enclosed space. It has been verified that the jet ventilation system, as opposed to a conventional ducted system which was subject to the same fire test, could effectively cool and contain the occurring fire gases. Air ducts, however, failed to provide sufficient exhaust capacity and even had the tendency to further the diffusion of smoke fumes in the worst case.

contingent on the current occupancy level of the car park.CO concentration is continually monitored by an adequate number of CO detection heads spread throughout the car park.As long as pollution limits are not exceeded, individual fans in designated areas of the car park may be switched off, thus saving energy and  lowering the  noise  level within the building

lower construction costs and more efficient use of floor space

Jet fans will require additional wiring and elec tronic controls,  but this is more than compen sated for by significant  sav­ ings in installation costs, as air ducts become obsolete when using an  impulse  ventilation   system. Furthermore,fan sizes and installed motor powers can be reduced.With increasing floor space,the cost advantage  of  the jet  fan system  becomes even more significant. The low  profile of the jet fan allows to keep the ceiling height of the car park to a minimum.

Jet fans will allow the creation of virtual fire compartments within the car park, as their air streams prevent smoke from spreading to adja cent areas of the car park not affected by the fire.The physical division of the floor space by fire walls is no longer necessary and even the use of a sprinkler system might become obso lete. Thus,the use of a jet fan system allows for a more open-plan design of the car park and enhances manoeuverability. The overall number of park­ ing spaces is increased,effectively en hancing operating results.

In enclosed  car  parks,the induction  effect  of Wolter jet fans creates a constant movement of air from the supply to the exhaust points,keep­ ing CO levels  to  a  minimum. A well-designed distribution of jet fans  throughout  the car park will prevent the accumulation of exhaust fumes in dead spots.

The high-velocity air stream  along  the  ceiling level will  induce a  low-velocity  air stream at floor  level,  ensuring the  required  mixing  of low-level and  high-level  atmosphere  which is generally insufficient in a ducted  system,while keeping  the  air  speed  at walking  height still comfortably low.

The use of jet fans achieves ventilation results superior to the conventional ducted  systems and offers substantial advantages .The addition al capital cost of the jet fans is more than compensated by savings in construction and oper ating costs.

from design stage to commissioning.

Rosenberg and its co-operation partner Burkhardt Projekt GmbH will assist you through all stages of your car-park project, from the initial layout to the final acceptance test. We will provide all documentation necessary  to obtain a  homolo gation from  local  authorities

The initial step in the design of a jet ventilation system should always be a careful analysis of air distribution and movement based on computational fluid dynamics {CFO). Customised software allows us to create a 3-dimensional image of the car park. After determining all relevant parameters such as required air-change rates, exhaust volume and airflow direction, different ventilation scenarios for standard and emergency operation can be studied. Taking into account all relevant local regulations, the number, size and positioning of jet fans can be optimised.

CFO software visual zes direction vectors of airflows and air distributions in all areas of the underground car park. CFO design can also be used to simulate smoke propagation for different fire scenarios and to study the smokecontrol effects  of  alternative jet  fan  distributions.